Scientists and doctors have for years found it very difficult to replace the time-honored finger-prick method of monitoring glucose levels, but all that may be coming to an end in the very near future. Not surprisingly, a solution has been found using the universal wonder-material graphene, by using some of its more exotic properties. In this case, a non-invasive patch (meaning no needles involved), has been developed by a research team at the University of Bath. The patch extracts glucose from body fluids via a whole array of tiny sensors activated by an electrical current.

The collected glucose is held in tiny reservoirs so that readings can be taken at 15-minute intervals, and any variations can be reported. The architecture of the sensor arrays permits monitoring without having to re-calibrate periodically, which was a limitation of the past. Monolayer graphene has only been commercially available for about the last decade, but it has already made a powerful impact in the areas of high-speed photosensitivity, farming applications, flexible photodetectors, medical diagnostics, and water purification processes. Graphene is considered an ideal element to use for this kind of research and testing, because it is extremely conductive, as well as flexible, strong, inexpensive, and environmentally friendly.

Development of the patch itself isn’t the only thing that’s ground-breaking and revolutionary in concept about the graphene glucose monitor. Each of these patches is fitted with a number of micro-needles that are capped with tridecanoic acid, and whenever the level of blood glucose rises to a pre-determined point, the patch warms up tiny heaters on the patch, which distorts their caps enough to cause them to open up, and that allows the release of metformin. Metformin is a drug which is routinely used to treat diabetes, as it helps to manage blood glucose, and can be effective when coupled with exercise and a good diet. Once things cool down again, the tiny caps are restored to their original shapes on the micro-needles, and no further metformin can escape. 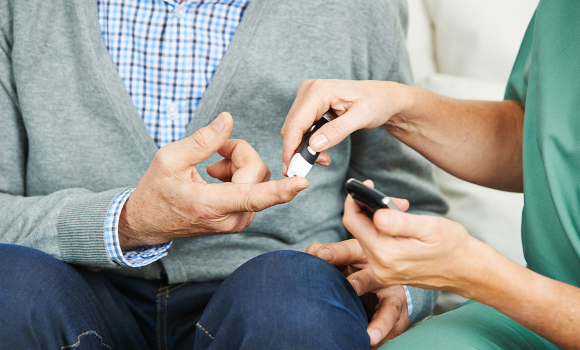 During the testing phase of the device, it was used on both pigs and humans, with the tests on pigs preceding those of human volunteers. Testing on the pigs confirmed that glucose levels could be accurately tracked at the same range which would be expected of human patients who were diabetic. That gave researchers the confidence to proceed with human tests, and when these were conducted, it was indeed discovered that glucose levels could be successfully monitored throughout an entire day. This included all variations from the norm, which were accurately detected by the patch, and responded to correctly.

After the resounding success of the prototype graphene patch, researchers will now experiment with the number of sensors in the array, so as to achieve the optimum number to be used on patches for diabetic patients. It is hoped that the end result will be a low-cost, highly accurate wearable patch, which is capable of sending regular information to the owner’s phone or smartwatch, along with alerts when levels are out of tolerance. In this way, action can be taken immediately, and any issues can be averted.

There are several outlets in this country where high-quality graphene sheets for sale can be purchased for use in new product development, or to create larger quantities of an existing innovative graphene product. Grolltex is one of the premier manufacturers of premium monolayer graphene. To acquire high-quality graphene sheets for sale, or monolayer graphene, contact us with any questions you might have, or to place an order.