For a fairly long time now, scientists have been chasing the enticing possibility of mimicking human skin, because of the enormous potential it presents to the fields of robotics, prosthesis, haptics, the tactile Internet of Things, and for wearable devices. Up until now, this pursuit has been frustrated by the failure to develop materials and products which approximate the natural receptors for pressure and force in the skin, while also having the capability to operate at an extremely low voltage.

Tactile sensing also presents a problem in that it is by nature, a distributed function rather than a single-point function, so any duplication of standard skin sensitivity would also have to be distributed. Field-effect transistor-based pressure sensors (FET) have met with limited success, since in a matrix configuration they do satisfy the distributed question, and they are also highly flexible, as they would have to be. However, they do require relatively high voltage for operation, which is basically a deal-breaker when large areas of tactile sensing are involved. 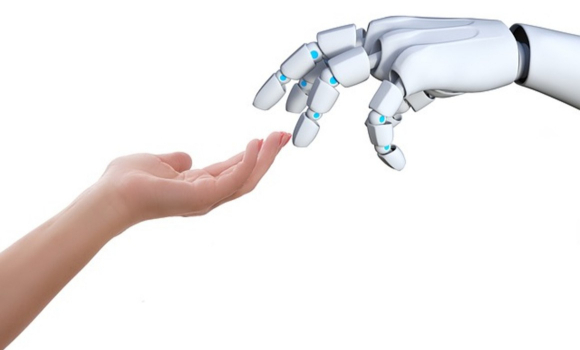 Enter graphene, the modern miracle material, which has dazzled scientists with its extraordinary strength, flexibility, and high carrier mobility. A graphene field-effect transistor-based pressure sensor (GFET) has all the sensitivity and flexibility of the previous candidates, but also brings to the table an ability to operate at extremely low voltages, fulfilling all the major requirements for tactile sensing.

The sensing device itself is comprised of a GFET which is connected to a piezoelectric metal-insulator-metal (MIM) capacitor, in an extended gate configuration. When pressure is applied to MIM, it generates a piezo-potential, which influences the GFET channel current. This fabricated pressure sensor has been tested at a range of 23.54–94.18 kPa, with a resulting sensitivity level of 4.55 × 10−3 kPa⁻¹. Since the operating voltage is approximately 100 mV, this pressure sensor configuration is perfect for use in wearable electronics.

The recently developed GFET pressure sensor has a unique structure, comprised of a single layer of graphene (a transparent, tactile sensitive layer), along with a photovoltaic cell below that layer, which serves as a foundation for tactile skin that is energy-autonomous. The fabricated skin is very sensitive to the touch, and exhibits a high degree of energy self-management. Using this configuration, patches of tactile skin are integrated with a prosthetic hand, and various tasks can be performed, such as picking up soft objects and simple touching exercises.

In addition to the obvious applications for wearable electronics, ‘electronic skin’ can be used in the making of highly sensitive robots, as well as for amputees, and potentially burn victims as well. With the operating characteristics demonstrated by the GFET pressure sensor, much longer operation can be expected, as well as greater portability, and both of those are key features in the effort to develop a material which can successfully mimic human skin. With the preliminary success of the GFET pressure sensors, it only remains for developers to perfect their usage in some of the industries described above – another major success for graphene!

Grolltex – leader of the graphene industry

Grolltex has quickly become the most trusted source for high-quality monolayer graphene and hexagonal boron nitride (hBN). Grolltex is the most reputable and reliable producer of two-dimensional sheets of both. Contact Grolltex today for all your industrial graphene and hBN needs, and enjoy the peace of mind that comes from knowing you’re working with the very best.